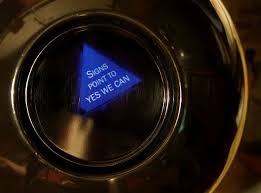 Regardless of the message of "Big Data" from Silicon Valley, some of the techies are currently utilizing the services of psychics and astrologers for "subjective" insights.

Click here for more information on how some of the techies are receiving help from "the psychic powers from beyond."

Q:  Would you trust some techies who emphasized the big data as the solution to gain informational insights while utilizing non-techie approach for their own usage?

Other Means
In the Asian realm, some preferred the essence of Yi-Jing for guidance while the others choose the approach of Ling Ch'i Ching.

The Dao of the Compass 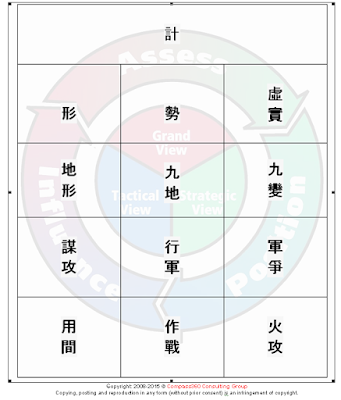 Our base preference is to utilize the Sunzi's Victory Temple Model (The Compass360 Consulting Group's Strategic Assessment chart) for assessing strategic situations.

As mentioned in the certain Chinese strategic classics (Sunzi, Six Secret Teachings, etc.) insights are usually gained from intelligence, not from pseudo psychics. 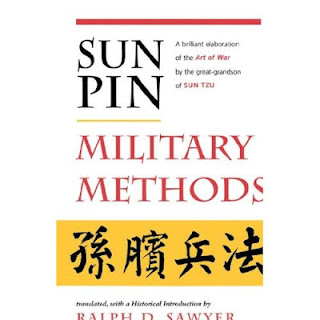 Q:  What are the distinctions and the differences between Sunzi's Art of War essay and the Sun Bin's essay?

Side note: "... Although the Art of War remains the only book known in the West, the Wu-tzu and Six Secret Teachings proved to be highly important sources for military wisdom over the centuries, and the latter continues to be held in higher esteem among contemporary PRC military professionals."   Source: Ralph Sawyer . com


The answers will be published in a future post.
Posted by Compass Architect at 3:33 AM 0 comments

Lesson From Sunzi's: Gaining Insights From Intelligence, Not From Psychics 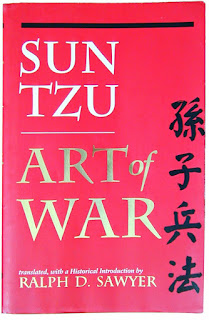 “The successful strategists usually will use the highest intelligence of his network with the intent achieving great success, and thereby they achieve great results.” -  Sunzi

---
To prevail in complex strategic situations, gaining insights from correct intelligence sources is the first step.

China’s former security czar, who has now been sentenced to life in prison, chose the wrong soothsayer. Zhou Yongkang, the most powerful Chinese official to have been caught in the communist party’s ongoing anti-corruption campaign, depended on a qigong mystic better known as the “Xinjiang sage” for his ability to heal incurable ailments and predict the future.

What the sage, Cao Yongzheng, did not foresee was Zhou’s dramatic downfall. Zhou went from being one of the most powerful men in China to a frail silver-haired man, who admitted to taking $21 million in bribes and causing $240 million worth of “economic damage” to the state. Cao even provided testimony against Zhou over the ex-official’s most serious charge, leaking state secrets. According to the official Xinhua new agency, Zhou leaked five “extremely confidential” and one “confidential” document to Cao.

Zhou is not the first Chinese official to fall under his sway. Another official charged with corruption, Li Chuncheng, the former party boss of Sichuan province, sought guidance from Cao and has been accused of abusing
his power to engage in “feudalistic and superstitious acts.” Zhou’s son, Zhou Bin, is also reported to have been close with Cao.

Cao, from China’s Western Xinjiang province, reportedly got his start by predicting China would win the bid to host the 2008 Olympics, and has cultivated a network of contacts that stretches into the upper reaches of
China’s political elite.

China’s elites seem to have a soft spot for qigong masters—the martial art based on channeling one’s qi, or energy, was all the rage in the country in the 1980s and 1990s. Another mystic, Wang Lin—with ties to the sisters of former leaders Jiang Zemin and Hu Jintao, Alibaba founder Jack Ma, actor Jet Li, and many others—came under scrutiny in 2013 after Chinese media began delving into his life and accused him of amassing wealth by connecting the powerful and elite contacts, not healing or fortune telling.

Not much has changed. The current administration is cracking down on dissidents and China’s budding civil society as severely as ever. Zhou’s conviction took place in a secret trial held in Tianjin, disappointing those who believed an open one would help improve the transparency of    China’s legal system. Comments on social media about the case have also been censored.

One censored blogger wrote (link in Chinese), “Even though Zhou Yongkanghas fallen, Zhou Yong Kang’s weiwen system cannot fall. This is the heart of the matter.”

A Compass Perspective For Applying the Western Chess Metaphor to Llife 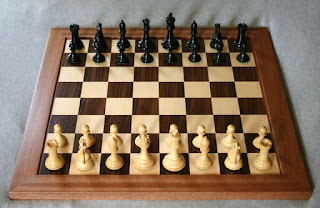 Posted by Compass Architect at 3:18 AM 0 comments 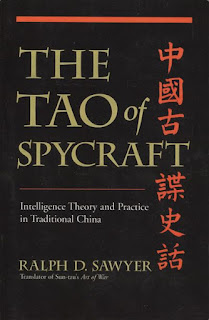 After publishing the John Batchelor's interview post yesterday, I thought of a better interview on that subject matter.

Click here on the starting point of all successful Sunzi's-driven endeavors.

That link leads to an interview between SPY Historian Mark Stout and Dr. Ralph Sawyer, the translator of the definitive edition of The Art of War and the author of The Tao of Spycraft.  This interview focuses on the sophisticated theory and remarkable practice of espionage in traditional China. (Time constraints precluded pursuing the numerous contemporary implications.) 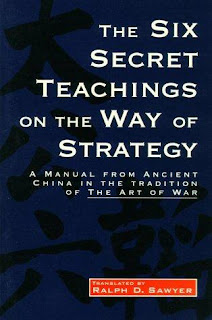 While the field solders espoused the essence of Sunzi's Art of War, the elite strategists usually heed the principles of Jiang Tai Gong and Wuzi on a 24/7 basis .

Comments From the Compass Desk
A big war is usually converted to a few small battles when one is able to connect chapter 13 of the Sunzi's essay to Jiang's Tai Gong's Six Secret Teachings.

To subjugate the predominant paradigm of a competitor while subverting their strategic power, we highly suggested the reading of  Sawyer's book on Spycraft and his translation of JTG's Six Secret Teachings.

Posted by Compass Architect at 6:18 AM 0 comments 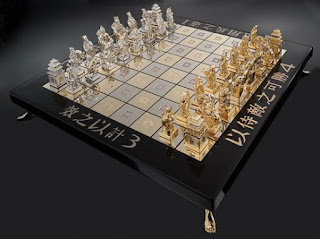 This past Fourth of July,  while working, I was listening to a John Batchelor's interview with Bevin Alexander, a military historian.
. 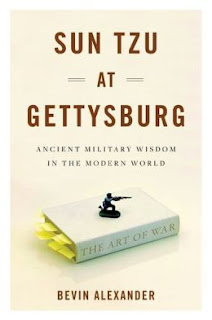 Click here and here for an audio copy of the interview. Click here if you are interested in the book.
Posted by Compass Architect at 5:55 AM 0 comments 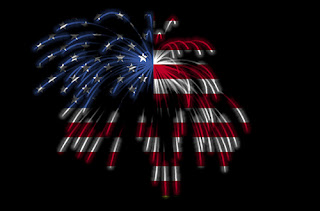 Have a superb day-- stay safe too.

The Compass View: Applying the Metaphor of Chinese Chess to Modern Competition 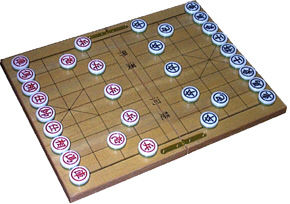 Chinese Chess (xiang qi) has always been a tactical-based board game that reflects the state of modern competition in reference to the boundaries, the limited resources and the proclivity of establishing the remote attacking protocol.  While the gist of western chess is symbolically closer to the politics of our western society, the gist of Xiang qi is about field level combat. 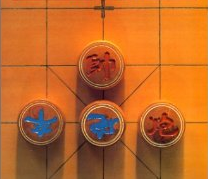 Following is an abridged listing of strategic and tactical principles (from Chinese Chess game) that could be applied to the real world:

Clue: Think of the symbolic meaning behind each piece. Then, connect it to the above listings of principles before attaching it to your strategic situation- identify its inner configuration before assessing the connectivity of the situation.

Positioning yourself by deciding whether a combinational tactic or a "wait and intercept" tactic is needed. 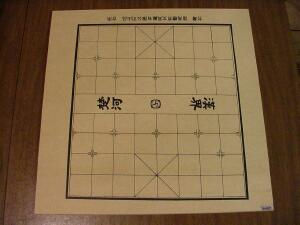 Failure to Plan is Not a Plan for Success (Cyber Economy) 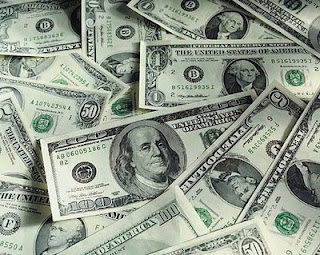 Jay Z,  a musical genius  has met his match when presuming that he had "the push" and  " the network" to succeed in the streaming music business.

Basing a decision on opinions and gossips is not the way to go.  He believed that his intuitive feel of the situation gave him the perspective that acquiring a streaming music business would give him the advantage.

Analysis
Every success is different.  Chinese strategic classics have emphasized on understanding the the cyclical state of the matrix of connectivity that operates behind a strategic situation

Failure to plan (w. the mindfulness of matching the operational specifics to the technical particulars of the  strategic objectives ) is to plan for failure.

The sum of vision and magical thinking usually does not create the strategic state of  proper planning, especially in a realm of ultra class competitors

Based on the assessment, the strategist positions himself by identifying the strategic infection point (sip). Determining the open points and the focal point that would lead to the best path of least resistance while being mindful of constraints.

The final step is influence.  ...  (We will continue this topic later.)