A Note on A Major Implementer of Sunzi's AoW's Principles 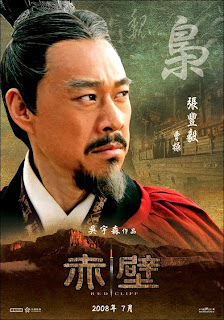 Cao Cao's was a major proponent of the Art of War principles. His approach focused on the devastation and the demoralization of the opposition w/ lightning-like attack and various underhanded tactics. One of his favorite offensive approach was the quick utilization of the cavalry to surprise the opposition.

My favorite Cao Cao's commentary is "By appearing at voids (undefended locations) and striking at the opposition's weakness, one is able to bypass their defensive strong points and assault him where he does not expect you. ...
"出空擊虛，避其所守，擊其不意"

#
[ China finds likely tomb of 3rd century general ]
BEIJING – Chinese archaeologists have found what could be the tomb of Cao Cao, a skillful general and ruler in the 3rd century who was later depicted in popular folklore as the archetypal cunning politician.

Archaeological officials say Cao's 8,000-square feet (740-square meter) tomb complex, with a 130-feet (40-meter) passage leading to an underground chamber, was found in Xigaoxue, a village near the ancient capital of Anyang in central Henan province, according to the official China Daily newspaper.

Historians say Cao Cao's outstanding military and political talents enabled him to build the strongest and most prosperous state in northern China during the Three Kingdoms period in 208 to 280 A.D., when China had three separate rulers.

Characters based on Cao are depicted as shrewd and unscrupulous villains in traditional Chinese operas and in one of China's best-loved historical novels, "Romance of The Three Kingdoms." In the fictionalized account, Cao says, "Better for me to wrong the world than for the world to wrong me."

The common saying in Chinese "speak of Cao Cao and Cao Cao arrives" is the equivalent of the English expression "speak of the devil." Cao was also a prolific poet.

From the tomb complex, the bones of three people and more than 250 relics have been unearthed in nearly one year of excavation work, Chinese archaeological officials were quoted as saying. The bones were identified as the remains of a man aged about 60 and two women, one in her 50s and the other between 20 and 25 years.

Experts say the male was Cao, who died at age 65 in 220 A.D., the elder woman his empress, and the younger woman her servant. The report said among the relics found were stone paintings featuring the social life of Cao's time, stone tablets bearing inscriptions of sacrificial objects, and Cao's personal belongings.

Tablets carrying the inscription "King Wu of Wei," Cao's posthumous title, were seized from people who had apparently stolen them from the tomb, the report said.