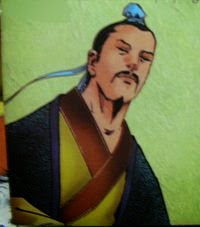 Fan Li was a famous, successful Chinese strategist who understood the power of Shock and Awe and the importance of staying ahead of the current and the future opponents.

Shock and Awe
The often taunted Shock and Awe  tactic was not invented during the 21st century.  One can find some aspect of it during  the warring history of Imperial China.

Many of the serious students of the Art of War know about the story of how Sunzi used a "Shock and Awe" maneuver to transform an undisciplined group of the Emperor's royal concubines into a perfectly marching platoon.

The Fan Li's Tale
During the warring states, the great Fan Li who served Goujian, the ruler of Yue, implemented a psychological "Shock and Awe" strategy that shattered the mind set of their opposition- Wu's state.  It also enabled the Yue troops to subjugate their Army.

Side note: Sun Wu (aka. Sunzi) mentored the ruler of the Wu State in the principles of strategy.   ...  The Wu's ruler and his advisers had already exiled him from their court by the time Fan-Li and the Yue army fought them.

Fan Li utilized an unorthodox  tactic that is called "Killing the Chickens to Shock The Monkey" where 300 condemned prisoners was inspired to march to the edge of the enemy's line where the troops of Wu were stationed at. Concurrently, there were 500 warriors from the Yue state that were concealing behind the bushes.

After arriving at their enemy line, these 300 condemned men announced their loyalty to the Yue state and slitted their throats altogether. This surprised action shocked the Wu Troops so dramatically that they began to scream in utter confusion. The confidence of the Wu solders immediately dissipated and fled in terror.

Yue's troops immediately attacked the retreating opposition. During the onslaught, thousands of the Wu troops were slaughtered and Helu the King of Wu became mortally wounded.

Summary
The intent of this unorthodox strategy was to target the psychological weaknesses of the competitor's leader and their troops.  Due to its originality, the targeted competitor was caught off guard.  The outcome became devastating for the losing side.

Retrospectively, an underdog usually prevails in an extreme competitive situation through the approach of combining the qualities of directness and indirectness.

Q: Do you know how to subjugate your competition through the use of various unorthodox means? 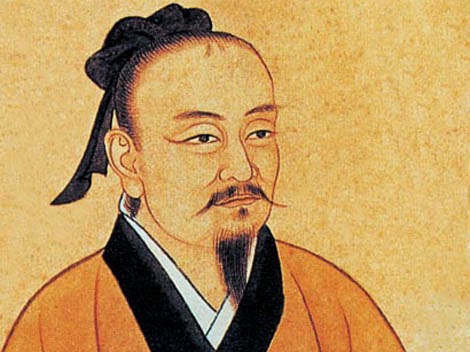 Side note:  It was rumored that Fan-Li was an ardent reader of  Tai Gong's Six Secret Teachings.

Click here for an interesting perspective on Shock and Awe" from St Petersburg Times.

Fan Li (Chinese: 范蠡; pinyin: Fàn Lǐ) was an ancient Chinese advisor in the state of Yue in the Spring and Autumn Period. He had been to the state of Wu as hostage together with King Goujian of Yue. Three years later they came back and he helped Goujian to carry on a reform. At last Yue was able to defeat the state of Wu. After the victory he resigned and renamed himself Tao Zhu Gong (Chinese: 陶朱公; pinyin: Táo Zhūgōng; literally "Lord Tao Zhu"). He became a successful businessman in his later years and was famous as a rich person.
In the legend, after the fall of Wu, Fan Li retired from his ministerial post and lived with Xi Shi on a fishing boat, roaming like fairies in the misty wilderness of Tai He Lake, and no one has seen them ever since.
Fan Li managed a pharmacy selling traditional Chinese medicine. The pharmacy originally included only two elderly employees, He Bo (Chinese: 何伯; pinyin: Hé Bó) and De Shu (Chinese: 德叔; pinyin: Dé Shū). The business began to expand only when Tao Zhugong hired He Bo's youngest son, Xiao Wen (Chinese: 小文; pinyin:Xiăo Wén).
Fan Li became one of the prototypes of the late folk deity of Prosperity (Cai Shen). He is ascribed with writing a book known in English as "Golden Rules of Business Success" (simplified Chinese: 经商宝典; traditional Chinese: 經商寶典; pinyin: Jīng Shāng Băo Diăn). This book, most probably of a later origin, remains popular today as its advice is sometimes considered timeless. It includes Twelve Business Principles and Twelve Business Pitfalls describing the art of successful business management.
Fan Li was unusual among tycoons for his view of money. He believed that one who understood money would be willing to abandon it if it became a burden. It is only a means to an end and should not be taken too seriously. Nonetheless, it must be handled and acquired according to principles. Fan Li also urged a somewhat loose construction of these principles, encouraging broad and flexible utilization in various situations.
The Twelve Golden Rules are as follows:
The Twelve Golden Safeguards are:
Click here on a literary view of Fan Li's life.


Comments From the Compass Desk
Those who are capable to leaving from a macro success, with their head in tact and able to establish a successful second life, is the consummate strategist.

Posted by Compass Architect at 1:08 AM